The updated Travers Smith logo is part of a much wider programme of work in promoting LGBT+ inclusion at the firm. During Pride season for example we ran a number of campaigns aimed at raising LGBT+ awareness, supporting LGBT+ charities, and empowering people to promote LGBT+ inclusion in their wider community.

On 29 June, we launched the second year of a pioneering mentoring scheme in partnership with LGBT+ charity Just Like Us which aims to give LGBT+ graduates the skills, confidence and support they need as they transition from university life to full time employment. For this second year, 25 mentors invited to participate by Travers Smith, will be working with LGBT+ university students from across the country, giving them the skills and advice to guide them through a period of significant change and start their first job confident in being themselves. Some of our wonderful mentors include This Morning’s resident doctor and Cbeebies presenter, Dr Ranj Singh; Brian Bickell, CEO Shaftesbury; Amy Lamé, The Mayor of London’s ‘Night Tsar’; and former RAF pilot Ayla Holdom. 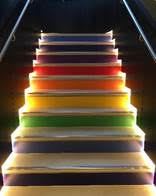 The LGBT+ network group brought some additional colour into the office for Pride season by transforming the staircase to Braithwaite’s (our café area) into a celebratory rainbow.

We are supporting Just Like Us (JLU) and their Rainbow Ribbon Campaign, which aims to support LGBT+ young people by raising awareness of the prevalence of LGBT bullying in schools. Everyone at the firm was given a ribbon to wear or to give to a friend of family member to wear to show support and solidarity for young LGBT+ people and the wider LGBT+ community. The ribbon forms part of JLU’s wider work in promoting School Diversity Week – a national campaign aimed at providing schools and young people with tools to combat homophobic, biphobic and transphobic bullying.

Sponsored by the firm’s LGBT+ Group, in partnership with the firm’s other diversity network groups, we are hosting a pre Pride event to showcase our exciting LGBT+ related initiatives. We will be serving When in Rome Wine, a craft boxed wine company which is giving all profits from the sale of two special edition Pride themed wine boxes to Just Like Us.