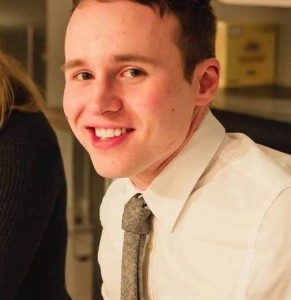 ‘When did you come out?’ is the question most often asked of anyone in the LGBT community in a discussion of their sexuality. Perhaps there is an assumption that your name was called, the closet was unlocked and you burst out of the closet saluting your audience – in the same way Simon Cowell enters the X Factor studio on every live show. However, the truth is we have many closets; sort of like a walk-in wardrobe where you find yourself opening a number of doors throughout your life: to family, to friends and eventually to colleagues.

But what about on an application form?

When I applied for vacation schemes, I hadn’t opened up many of the closet doors. For that reason, I avoided any talk of my sexuality. Admittedly, I did mention being a fan of One Direction in one interview – take from that what you will. However, I feel that was more of a social faux pas than it was a signpost anything else.

When my vacation schemes came around, I was openly gay but not entirely comfortable about how that would be accepted in the upper tiers of the legal world. But my aspirations had always been to get to the top, so I invested time assessing where my sexuality would not hold me back. By the time it came to training contract interviews, I had to find a balance between describing how important the firms’ LGBT culture was to my decision to pursue a legal career there, and not depicting myself as a wannabe ‘diversity statistic’.

The firm where the reference to One Direction arose was ultimately where I am now training to be a solicitor. Therefore, I thought it was only appropriate to use the music of One Direction to communicate what I learned through my experiences of engaging with LGBT issues in the application process. There should be no fears to opening that closet door to City law firms.

Drag Me Down: The effects of being LGBT on your career

I am going to start off with something that should be obvious: being LGBT will not stifle your career and can be positive for you and the firm you join.

This was not something that was completely obvious to me until I had to prepare a mock client pitch during one of my vacation schemes. Law firms pitch to clients for work and put together teams of people to work alongside that client on the number of matters they may have. But what is not always apparent is that the clients will see the teams as representative of their brand, expecting the team to reflect the value they place on diversity, bringing a variety of talent to the project. Having a more diverse set of trainees will therefore be a positive for the firm putting together that team.

LGBT applicants should realise that their LGBT status automatically connects them to a number of other professionals within a firm as well as its clients. I have been extremely fortunate in that my firm’s LGBT network has given me the opportunity to visit people in network offices when I was travelling and studying abroad, and also to help run workshops at the annual LGBT Leaders conference.

Diversity should also be viewed as a bigger picture. Diversity brings with it fresh ideas, new perspectives and different approaches – whether that be to deals, teamwork, or otherwise. A recent study based on a number of traders found that teams   that were diverse in sexual orientation, gender and ethnicity delivered better results than homogenous teams. Almost all firms in the City would consider themselves as innovators – doing things that have yet to be done. In order to do that, diversity of ideas and approaches is crucial, and is celebrated. Therefore, there is reason for you to celebrate your diversity too.

I am constrained by my choice of band here, as I would by no means ever describe LGBT networks as ‘Little Things’, neither in their membership numbers nor in their capacity for impact, but the ‘Little Things’ that they may be able to do for you during your career can mean a lot.

The visibility and activity of an LGBT network in a firm is a strong indicator of how accepting that firm is, and how unnecessary it is to conceal your sexuality. I found shying away from discussing my sexuality particularly unnecessary where a firm is committed to an ‘allies’ programme; a programme that welcomes non-LGBT people to be part of the LGBT network to show their support of LGBT issues and their colleagues. LGBT networks discuss how to promote diversity within the firm and how to bring that into recruitment. Such networks can also be used as a channel through which to receive advice and support when making career decisions, such as when applying for an international secondment – which could be invaluable if you have aspirations to visit Moscow or some African countries.

Beyond being support networks, LGBT networks are also important for doing exactly what every other network is designed to achieve: networking! The firms I worked at all had varying approaches to their LGBT networks, such as organising annual conferences, summer parties and art exhibitions.  All of these present opportunities to meet people within a firm, or meet clients. Many of my colleagues on vacation schemes mocked firms for distinguishing themselves based on ‘their culture’, suggesting this was an empty suggestion and that all lawyers were somehow homogenous. My experience of meeting people at firm LGBT events very much showed me how each firm differed, and it ultimately helped me make my mind up of where I wanted to undertake my training contract.

It was my experiences with LGBT networks that I mentioned in my interviews as  that played an important part in why I was attracted to the firms I was. I had gone from potentially being seen to dropping my ‘ ‘Gay Card’ in mentioning One Direction, to actively discussing a topic that was fundamental to my decision in where I wanted to pursue my legal career. One approach was risky; a sort of ‘novelty’ suggestion that I had actually intended to be humorous but could be interpreted as trying to win some diversity points. The other may be perceived to be risky too, in that it was not clear what the reaction would be. But the only risk I perceived there to be was my confidence in my perceived celebration of LGBT diversity actually being inaccurate. I am happy to say that risk never eventuated.

You’ve Got That One Thing: Playing ‘The Gay Card’

If anyone watched ‘The People v OJ Simpson’ recently, you will have seen how the ‘Dream Team’ defence lawyers used The Juice’s race as a key part of their strategy that ultimately led to their victory (sorry if I ruined the ending for anyone that didn’t know…). It is often said they played the ‘Race Card’ to get their acquittal. But should you extrapolate from this that playing the similarly diverse ‘Gay Card’ could lead to judgment in your favour by recruiters?

Playing a ‘diversity card’ is a concern I am most often asked about – whether mentioning you are LGBT in an application is something you should do. It is true firms in the City are increasingly aspiring to be more diverse, but being LGBT is not a qualification itself.
My approach to answering whether to mention you are LGBT is always: consider if it is relevant. If you play a leading role in your university’s LGBT society, or you campaign for LGBT issues, or you attended an LGBT event where you found out more about the firm, that can be hugely relevant in discussing your achievements, abilities and knowledge. You shouldn’t shy away from mentioning LGBT issues in this context: that’s not playing the ‘Gay Card’. In my case, that did not even involve me explicitly saying I was gay. Playing the ‘Gay Card’ is to mention your sexuality without any relevant context. ‘GAY’ may only be three characters, but those may be important when you are limited to just a couple of hundred in an application.

There is one exception. On any ‘Diversity’ section of an application, you should not shy away from mentioning your sexuality when it is directly addressed (unless you don’t wish to disclose it, of course). This is never (to my knowledge) used as part of the assessment of your application, and so you wouldn’t actually be playing any cards at all.

What Makes You Beautiful: LGBT issues in interviews

With LGBT networks, societies, events, and everything else that goes with them, there is sometimes a fear that when it comes to interview it may be the only thing you have to talk about.

If this is an issue, during your preparation rank any examples you have in order of importance: what LGBT experience demonstrates your abilities most, or why you are so attracted to the firm. When it came to my interviews, I had managed to attend a number of events and met a number of people from the networks – but when it came to answering why I was interested in the firm I chose the most important experience that showed each firm’s culture to me, and which I left having got the most out of. For the firm I ultimately chose, that was being invited along to a weekend charity event where I was able to meet not just lawyers from the firm, but also secretaries and support staff, which left a lasting impression of me on the inclusiveness of the firm.

Hopefully this article will have provided you with some insight as to how to approach being LGBT on your application.

ONE WAY OR ANOTHER I am sure you will find the right way for you yourself to bring in the importance of LGBT culture and your experiences into your applications. Your worries will hopefully be all but HISTORY and MIDNIGHT MEMORIES. You will soon be READY TO RUN into a legal career, and WHAT A FEELING that will be. (FYI – for any non-Directioners, those are 1D songs…).