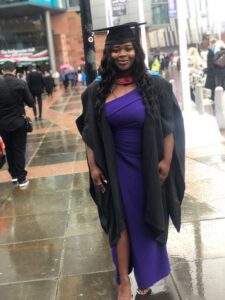 Congratulations to our Member of the Month for February 2020, Sandra Boateng!

Sandra is part of the first generation in her family to attend university. Moving from Germany to the UK to complete the LLB, she was determined to gain experience in the legal profession whilst aiming to achieve a first class. After three years of hard work where she juggled doing pro bono, paralegal work and a part-time job whilst studying in her second language, Sandra was awarded a first-class degree in Law. In her final year, she achieved 72%-80% in three out of four exams.

Sandra joined AS as a member in 2016. Shortly after, she was put on the ‘One’s to Watch List’ for students with great potential in the legal profession. Since then she frequently travelled to London to attend open days, HeadStart workshops and networking events in the City to make legal connections. Her involvement in AS’ Commercial Awareness Competition and AS’ Aspire helped her develop necessary skills and attributes. Therefore, she was awarded the ‘Career Commitment Scholarship’ by BPP to help fund the LPC; a scholarship as testimony for her hard work and drive to flourish as a legal professional.

As a Diversity & Inclusion Ambassador, Sandra helped improve BAME students’ experience at university. By presenting issues to the Vice Pro Chancellor and other stakeholders at her university, she was determined to demand change and assistance or BAME students, both academically and professionally.

She led focus groups, organised workshops for students to discuss issues and planned and delivered her university’s first BAME Law Panel. In her capacity as Vice President of Manchester Law Society, she also organised a Mooting Competition at her university, enabling the finalists to showcase their advocacy skills at the Supreme Court in front of Lady Hale.