We are absolutely delighted to award Benjamin Peacock the Aspiring Solicitor Of The Month for February 2016.  His energy and commitment to his academics, law and assistance to others are exemplary.  Congratulations Benjamin.  You really deserve this recognition!

Benjamin Peacock is an unde 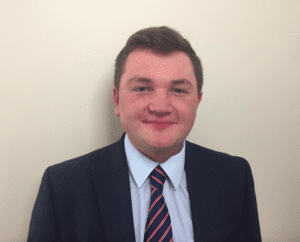 rgraduate at St. Hugh’s College, the University of Oxford. He was first educated in Orpington prior to moving to Cumbria for the remaining 11 years of his schooling. Benjamin attended non-selective state schools throughout this time, attaining some of the best marks in his respective primary and secondary schools. In Sixth Form, he set his sights upon studying at the University of Oxford. Benjamin’s successful application and subsequent meeting of the offer made him one of just two students to progress to Oxford from his Sixth Form Centre over the last 10 years. Since arriving at university he has maintained excellence in his education, receiving 2.1 classifications on all examinations and collections.

Prior to studying at Oxford, Benjamin spent three weeks at a local solicitors firm that specialised in Crime, Conveyancing and Personal Injury. The experience enhanced his interest in the law and is to be credited with providing the extra encouragement he needed to apply to study law.

Since arriving at University, Benjamin’s interest in commercial law has greatly increased. He believes commercial law is most interesting due to the equilibrium of client service and the academic intricacies of the law that must be found. He argues that Oxford’s learning experience is fantastic to moot points on intricacies of law, but that practical application of law is frustratingly omitted. Therefore Benjamin wishes to move towards a practice of law that introduces legal problems that must be solved with a range other other influencing factors such as managing client needs.

Other than his interests in law, Benjamin is known for his commitment to diversity and inclusion. His extra-curricular activities at University focus on access and outreach work, that being work dedicated to supporting the brightest students to apply to Oxford no matter their background.

Such work included running a roadshow in Cumbria in July 2015, which attended a number of non-selective state schools. During the tour Benjamin engaged with over 800 students, developing a theme of aspiring to great things which was then developed into how the University of Oxford could facilitate big dreams. The tour was described as a massive success.

The roadshow was run through an organisation called Target Schools, the largest student-led access and outreach initiative in Oxford. After impressing on the roadshow, Benjamin put himself forward to become one of two Co-Chairs for Target Schools in December 2015. He was subsequently elected to the position. Resultantly, he now spends a great deal of time organising and running many Target School’s initiatives, including their Shadowing Scheme. The shadowing scheme brings talented Sixth Formers to Oxford to shadow an undergraduate for the morning, followed by lunch and a tour at an Oxford college, finishing with a workshop on Oxford life and making an application. The project usually makes contact with around 1500 students each year, all of whom are from ‘non-traditional backgrounds’. Some may be young carers, some are on free school meals, others attend targeted state schools.

In addition to this access work, Benjamin is St. Hugh’s JCR’s Access and Academic Affairs Officer for 2016. In this role he has been looking into the various teaching provisions for students with specific learning difficulties and other disabilities. This research has culminated in a push to create better provisions. For instance, Benjamin has received approval to develop an alternative learning space in the college library. The concept is to create friendlier atmospheres in library spaces for students who need minimal distractions, want access to large whiteboards to plan work or think things through, or require specialist equipment that cannot be used in normal library spaces such as speech-to-text software.