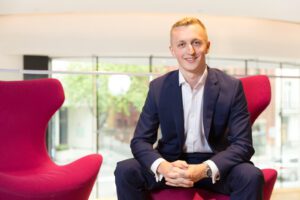 I’m Aaron and I’ve just completed my first seat of my training contract in the Employment department at Baker McKenzie.

The journey to my legal career started during High School when I embarked on the national Pathways to law programme ran by PRIME. I attended a low performing state school and was the first generation in my family to attend university and to enter the legal profession.

Whilst in my second year of studying law at the University of Nottingham, after having met Chris and the Aspiring Solicitors team at an event they ran at the University of Nottingham, I decided to enter the AS Commercial Awareness Competition and subsequently made it to the final which was held at Barclays HQ in Canary Wharf. This experience helped me to develop a plethora of skills which proved invaluable when applying for vacation schemes. With the support of AS at a number of further events, such as the VS+ workshop, I was able to further prepare in order to flourish on my vacation schemes, which eventually resulted in me accepting an offer from Baker McKenzie.

I then subsequently completed the accelerated LPC at BPP Holborn before commencing my training contract in March 2018.

Seeing AS continue to grow and endeavour to work with Baker McKenzie is a great way to ensure Baker McKenzie continues to attract the best talent which will allow the legal industry to become more diverse. Both Baker McKenzie and AS share the same strong commitment to making a change within the profession, and I therefore hope that I will see you at one of the future collaboration events between AS and Baker McKenzie where you can learn more about Baker McKenzie’s initiatives and strategies to promote inclusion and diversity.